I would like to thank all of you for your prayers, cards, greetings, baking and gifts during this Christmas season and for your continued support all year long.

The International Eucharistic Congress takes place in September in Budapest, Hungary. Below you will find information on the event provided by two of the Canadian Conference of Catholic Bishop’s delegates. 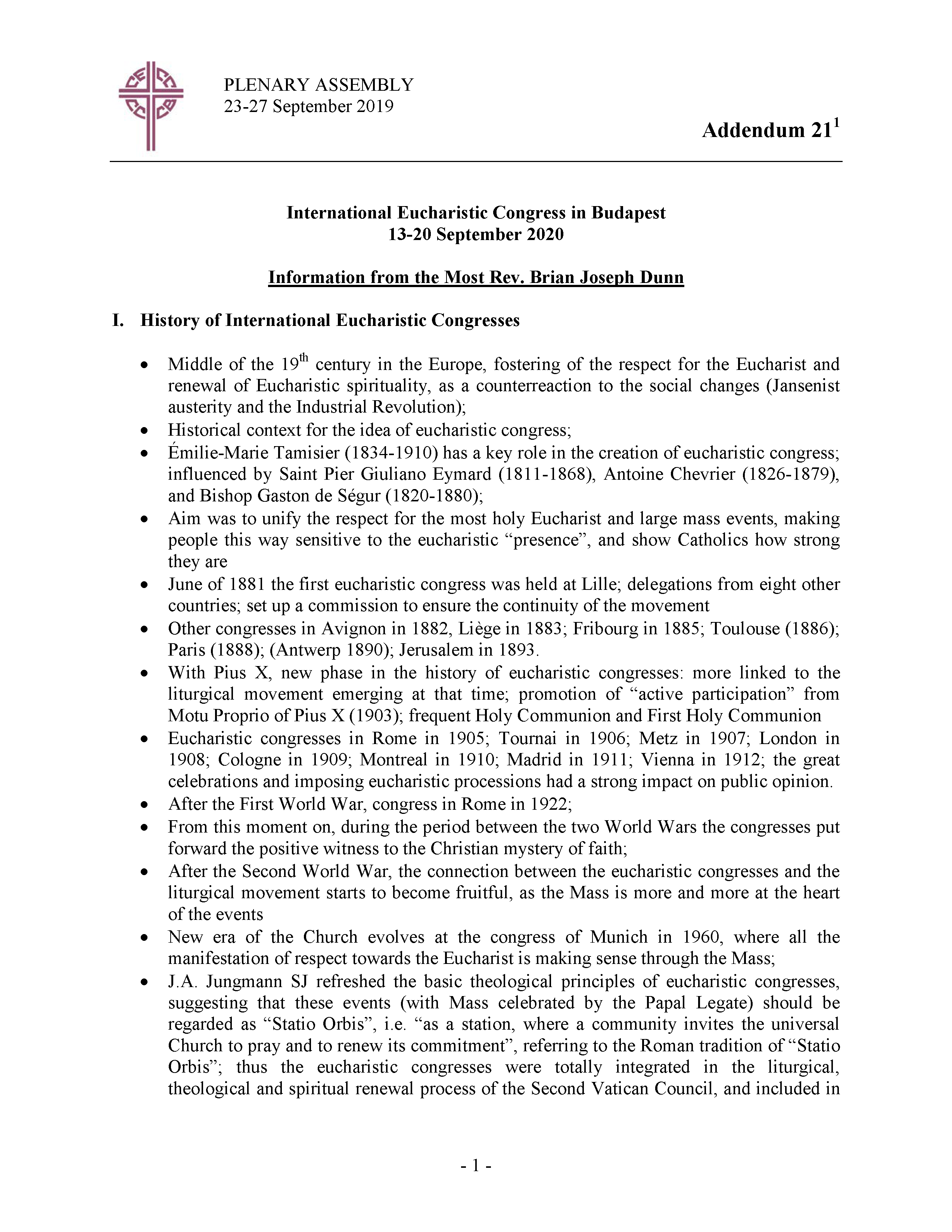 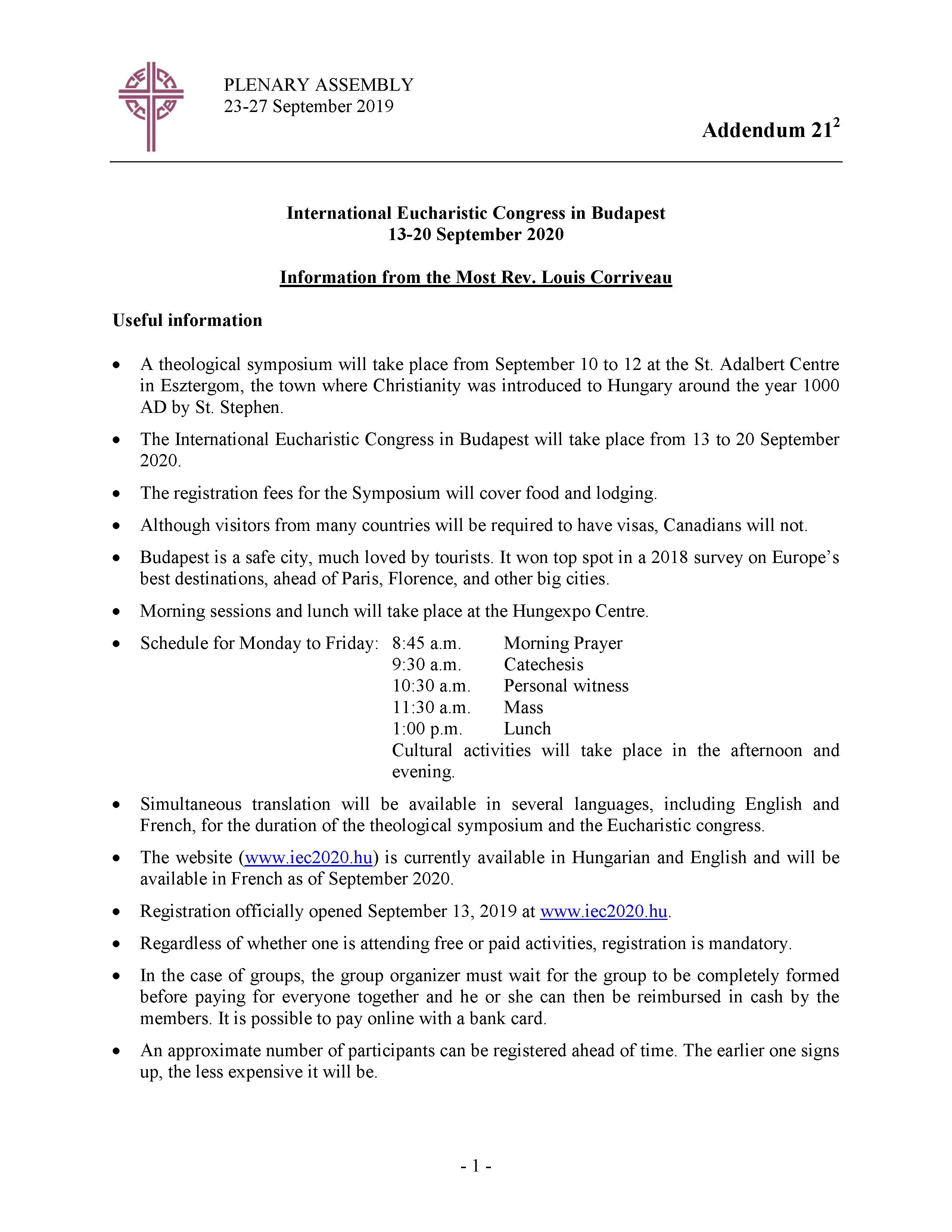 The Canadian Conference of Catholic Bishops has released an updated pamphlet on Cremation and Funeral Liturgies. It is available below for your information. 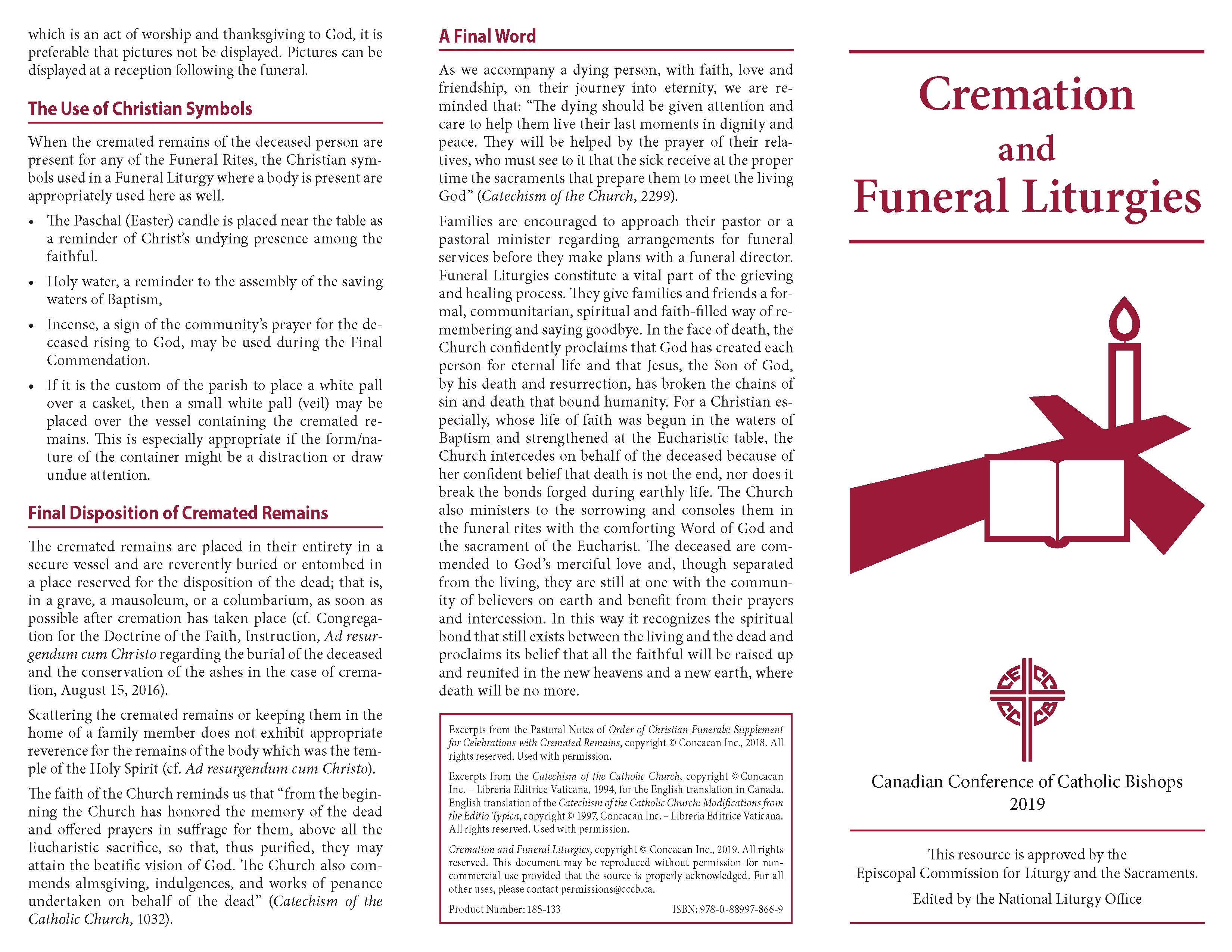 On Monday, January 13, the Government of Canada, through the Department of Justice, launched a two-week general public consultation on the expansion of eligibility for assisted suicide – euthanasia (“Medical Assistance in Dying”, commonly referred to as MAID) following the September 2019 Superior Court of Quebec ruling that found it unconstitutional to limit access to MAID only to people nearing the end of life. The Government of Canada has not appealed the Quebec court ruling, but instead has indicated it would be prepared to change the law for the entire country.

While the Government previously committed to a full review of the legislation five years after it was passed (June 2016-June 2021), the present consultation targets one specific component of the legislation (“Eligibility Criteria”) and is intended to help the Government form its response to the Quebec court ruling. Canadians are being invited to share their views (online or PDF) by the close of the consultation period on Monday, January 27, 2020, at 11:59 pm (PST).

The questions in the survey do not ask whether or not euthanasia/assisted suicide should be expanded to include persons with disabilities; that instead is assumed. The only direct questions in the survey regard whether or not a person should be allowed euthanasia/assisted suicide by means of his or her own advance directives or whether the Government’s current “safeguards” are sufficient to prevent abuse, pressure, or other kinds of misuse of MAID once eligibility is broadened to people whose deaths are not reasonably foreseeable. However, there is space within three sections of the survey for comments to be made, which could include, for example: expressions of concern about expanding access to euthanasia/assisted suicide because of pressures on or abuse of vulnerable persons (including minors, the depressed, the mentally ill, the disabled); the inadequacy of the so-called “safeguards”; advocacy for better and stronger safeguards; and the urgent need for viable options to MAID that would be possible through more adequate government funding and support for palliative care, home care, and hospices.

The faithful are invited to share their views by completing the questionnaire and including their own comments.

Some helpful resources are provided on the assisted suicide/euthanasia web page of the CCCB website:

The Euthanasia Prevention Coalition has also provided resources to assist you in filling out the survey:

For those that have been considering switching over to Pre-Authorized Debit, now is your chance. An application form is conveniently located on the back page of this weekend’s bulletin. All you have to do is fill it out, attach a void cheque, and drop it in next weekend’s collection.

Please write your name and address on the first envelope you use from your new box of 2020 offertory envelopes. For those who have not yet picked up their envelopes, remaining boxes are still at the back of the church.

Have you paid your CWL Dues yet? The deadline for members to pay is December 31. You can place your $20 dues in an envelope marked with your name and “CWL” and drop it in the collection.

A letter from Bishop Harris regarding his upcoming farewell Masses during November.